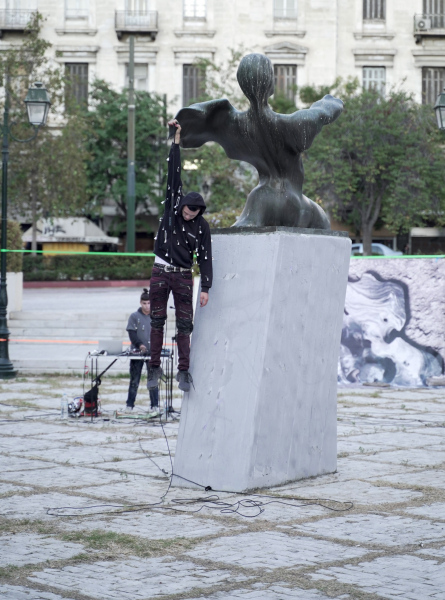 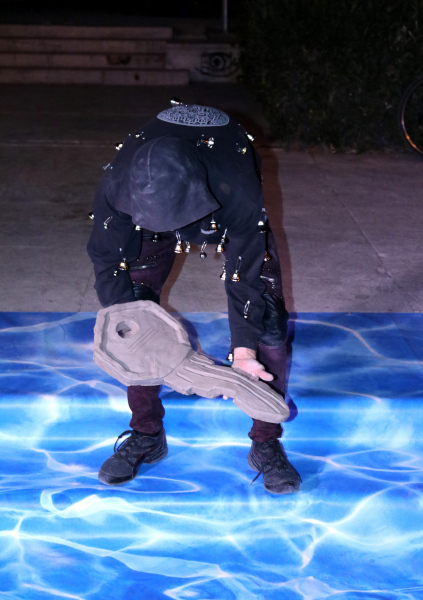 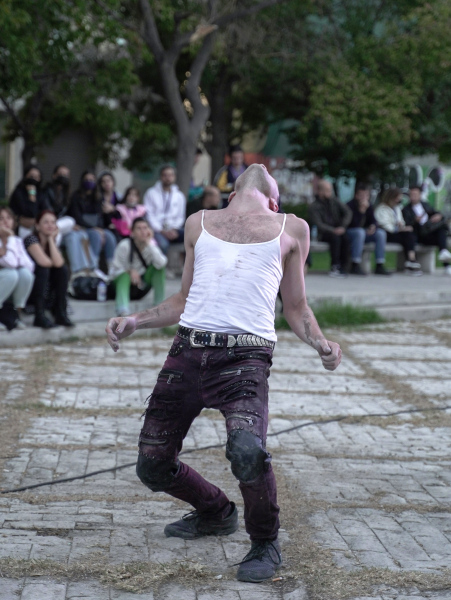 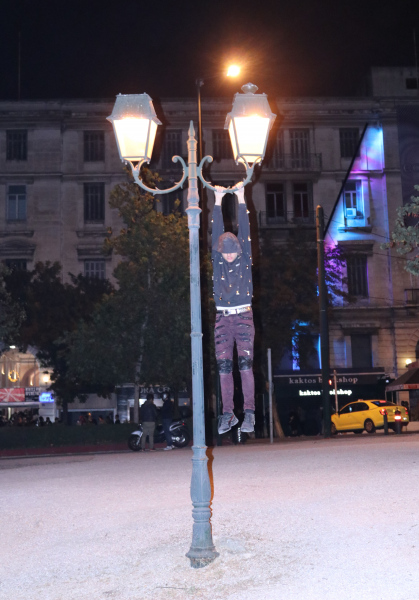 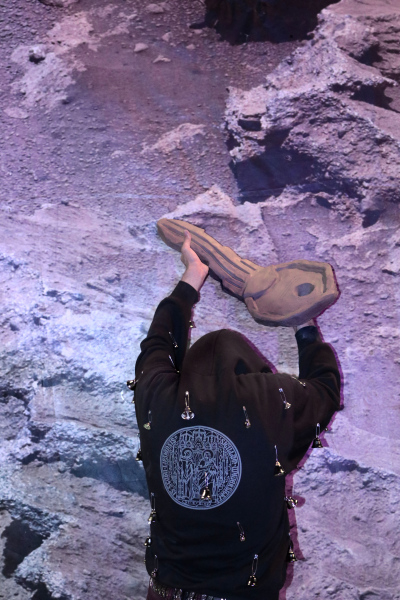 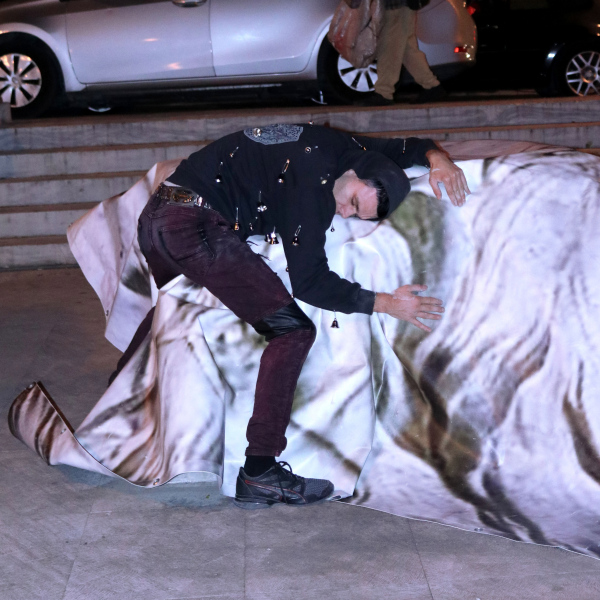 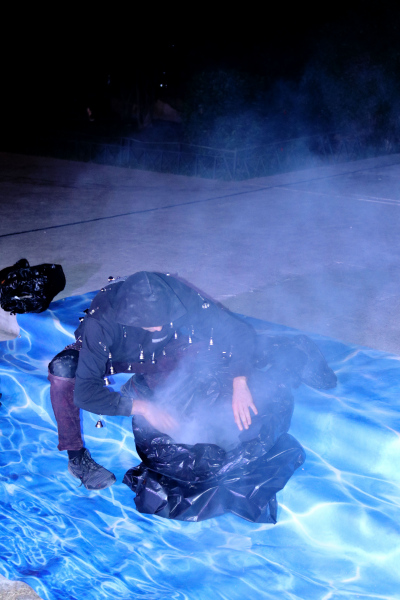 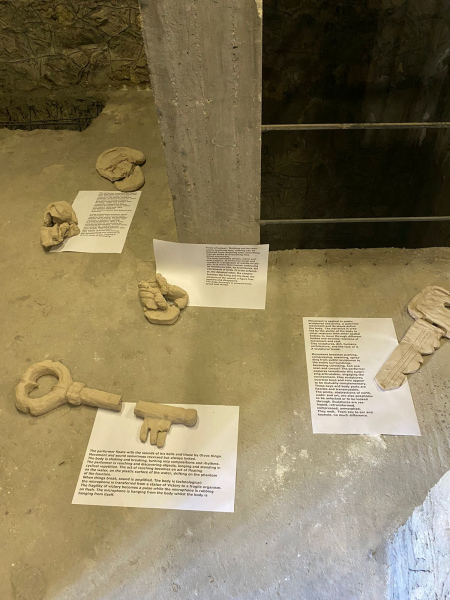 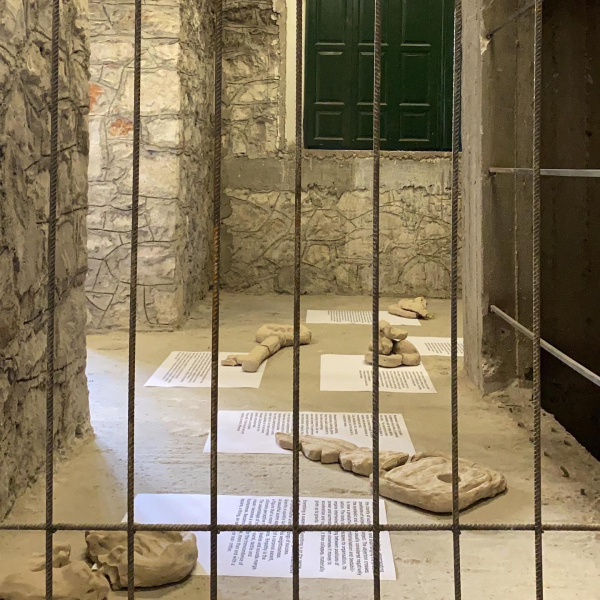 EXTRA_visit as part of Athens Biennale

To enwrap an entire square and sink into it wallowing is an intricate negotiation.

The square – let us name it Justice – is in reality the phantom of a currently demolished courthouse, a spot where utopia and dystopia converge. Dreadful yet exciting just like the work of Ballard, a reference subtly amplified in form, narrative and experimentation. Justice is the phantom of a fountain never built, the remains of what was supposed to be a new square, a re-articulation of the gap between body and architecture, charming as always in its lack of finitude. Lying below street level, this is an exemplary descent to history, modernity, sexuality, violence and the urban space. It also represents the warmth of a nest, a burrow, or that of a shelter. A patchwork of overlapping materialities and intoxicating narratives.

Julian Weber navigates the contextual difficulties with awareness and care. Recycled mise-en-scene unfolds in the square: stretched surfaces, sculpture fragments, earth and water in constant motion. Reused architecture collides with the body, shifts with it and constantly changes the power relations between subject, object and abject, with their rigid boundaries softened. Can Kristeva dance with Ballard and Deleuze?

A bell-embellished pullover starts the narrative. Like a court jester ready to fool wisely, the performer follows the sound he creates with his bells, a sound of warning, a sound of pleasure. With a body that confronts its materiality as something discharged. Transforming and trembling, expanding and contracting, becoming slippery with other bodies, with sound, with plants, ground and animals alike, eliminating any ontological gap between them, creating a shared sense of belonging.

Think of Latour; 'Nothing can be reduced to anything else, nothing can be deduced from anything else, everything may be allied to everything else.' Allied alienations. The body becomes smoke, water and dust (again). It turns into metal and marble or a projection of marble on plastic. It is more than human, embracing its monstrous side, its excrements, the excrements of birds. It is the unfamiliar, the detested other, the vampire between the living and the dead, the pleasure of the wound, a figure that appears and disappears. The body journeys in unusual time, speed and matter.

Julian Weber floats with the sounds of his bells and those by Otvos Kinga. Movement and sound sometimes reversed but always linked. The body is shaking and breaking, turning into compositions and rhythms. The performer is reaching and discovering objects, longing and standing in cyclical repetition. The act of reaching becomes an act of floating on the water, on the plastic surface of the water, drifting on the phantom of the fountain. When things break, sound is amplified. The body is technological; the microphone is transferred from a statue of Victory to a fragile organism. The fragility of victory becomes a pulse while the microphone is rubbing on flesh. The microphone is hanging from the body whilst the body is hanging from itself. Movement is applied to public sculptures and prints. A potential movement and its stasis define the body. The narrative is created by the ability of the body to enter relations with other spatial bodies, to move through different bodies and develop relations of movement and rest. Clay sculptures, dirt, humans, architecture, and the lack of it. A sculptural break.

Movement becomes pushing, compressing, scanning, spreading from public sculptures to the entire surroundings, becoming caressing. Can one scan and caress? The performer explores tentatively this surprising articulation, engaging the environment. Clay sculptures, oversize keys and ears appear to be mutually complementary. These keys and body parts are flexible and transmutable. The prints, abstractions of earth, water and art, are also peepholes to be unlocked or to be looked through. Sculptures are reshaped, retransformed, compressed, unmorphed. They melt. From key to ear and keyhole, no much difference.

The body leading these actions follows, interrogating the clarity of subjectivity and disarranging the precise positions of subject and object. The abjection crosses the symbolic and what is usually considered negatively is now a productive deterritorialisation and destabilisation. The body/space escapes its organisation, its organs intertwined, shifting between positions of power and surrender. From slowness it moves to acceleration and rupture, it then collapses, materially gives up to gravity.

Everything is suspended. Everything is on the verge of change. Giving up can be elevating as an alternative to conventional understandings of success. Gravity is quickly turned into weightlessness. A beautiful scene appears, of a corporal ascent, a figure that is more than one. Empathy is the ultimate perceptive tool as bodies and sounds merge. The assemblage of images -aural, tactile and visual- becomes a vehicle for the transcendence of humanness. Becoming extra, more than and with a square, a thing, an earthly -or not- critter.

EXTRA_visit.mp4 from Julian Weber on Vimeo.